To promote World No Tobacco Day 2019, AH&MRC and members launched their first-ever Twitter Festival in collaboration with Croakey. The World No Tobacco Day 2019 Twitter Festival was used as a springboard to discuss important issues in the Aboriginal health space linked to smoking. The hashtags #YourHealthYourFuture and #CommunityControl were used to connect conversations between speakers on the day. 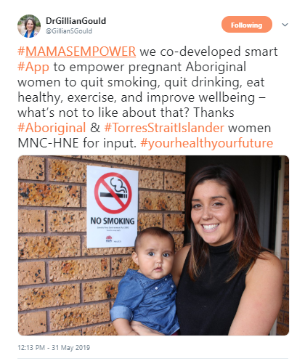 World No Tobacco Day (WNTD) 2019 provided the ideal platform to talk about the ongoing health risk to Aboriginal communities presented by smoking. While smoking rates in Indigenous communities have halved since 1994, a disproportionate amount of Aboriginal people still smoke. Speakers on the day, including Amy McQuire and Dr Gillian Gould, discussed the importance of closing the gap on discriminatory health care practices by involving Aboriginal communities in smoking cessation programs from the outset. 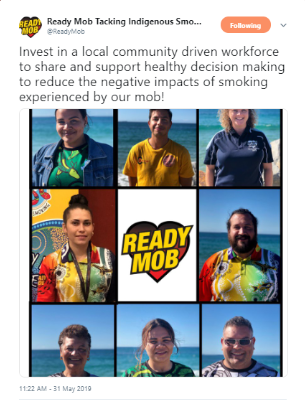 The Twitter festival was a huge success. The event trended nationally by 9:30 am and generated sustained engagement throughout the day. The Twitter Festival engaged hundreds of participants, delivered 17 million Impressions and produced over 2,000 tweets using the hashtags #CommunityControl and #YourHealthYourFuture. AH&MRC would like to thank all the speakers and participants who got involved on the day. Without you, the WNTD 2019 Twitter Festival would not have been possible!

An Epic Journey: Cycling from Sydney to Broken Hill for Indigenous Health

There’s never been a better time to quit: WNTD and beyond

Deadly tips on what to do if someone replies that they R NOT OK?