An Epic Journey: Cycling from Sydney to Broken Hill for Indigenous Health

About the author: Reuben Morrison-Greet is a 21 year old paramedic student who is passionate about Indigenous health. Rueben raised $1,330 for the AH&MRC by setting up a fundraiser for his cycling trip from Sydney to Broken Hill. No small feat, the cycling trip is over 1000 km away and took 8 days. The AH&MRC and our Member Services are grateful to Reuben and his contribution to Aboriginal health in NSW.

I remember standing in my kitchen, staring outside at the dark, pouring rain. “It’s an awfully long way,” my mum said, standing next to me. It was 6 am on a Sunday morning and, that day, I was going to embark on an 1000km cycling trip from Sydney to Broken Hill.  I was on a tight schedule as I planned to catch a train back from Broken Hill to Sydney in 8 days time.

But first I had to get there. My Trip from Sydney to Broken Hill

After resisting the urge to crawl back into bed, I rolled my bike out of the garden and started off towards the city. I pedalled through the morning traffic, over the ANZAC bridge, then Parramatta road. With a sleeping bag, mat, stove and everything else I needed for my weeklong journey strapped to my bike, I set my course for Lithgow. 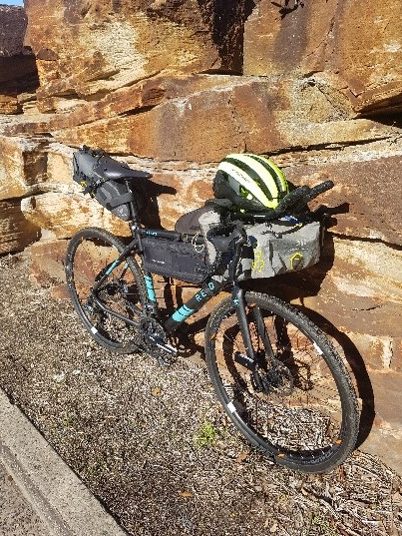 A fully loaded bicycle, a home away from home!

My growing curiosity on the topic of Indigenous health developed when I initially started my degree in health science, where I would find myself continually getting side-tracked during assignments. After reading articles about how Australia has one of the highest performing healthcare systems in the world, my eyes were often drawn to the little asterisk that always footnoted the too often undiscussed reality; “*For non-indigenous Australians”. It was only after I started down the trail of scientific articles, government reports, historical recounts, or coroners’ findings, that I would begin to grasp the scale and historical depth of these continued injustices that are still reflected today.

After some hair raising moments riding up and over the Blue Mountains, I crawled into a cheap pub room, ate a greasy dinner, and ended up shorting-out the entire upper floor of the pub in an attempt to dry my soaking wet gear with an electric heater.

The weather was marginally better; consistent rain accompanied by narrow highway shoulders and heavy trucks made for a stressful ride to Orange. A puncture in my tyre and a friendly chat with a bike shop owner helped break the monotony.

I decided to take a break from the bike to manage an ongoing injury and instead caught a bus to Condobolin. I struck up a conversation with a man in a pub and mentioned where I planned on stopping the following day; Murrin Bridge, an Indigenous community. I could write a whole separate blog on this conversation alone, but I’ll just say that it left a very bitter impression after realising that particular discriminatory attitudes towards Indigenous Australians were very much alive.

I set out after dinner and rode into the night, setting up my sleeping gear and sleeping bag cover by the side of the road.

As highways turned into single-lane roads, I suffered another punctured tyre coming into Euabalong. After asking around the town for some sealant, within 5 minutes I found myself explaining the unique design differences between Presta and Schrader bicycle tube valves to the entire council road works team at their Euabalong depot. 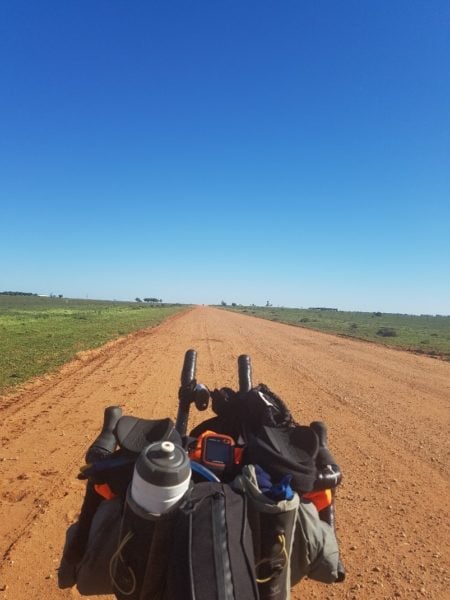 Hillston to Ivanhoe. Can you spot the car? 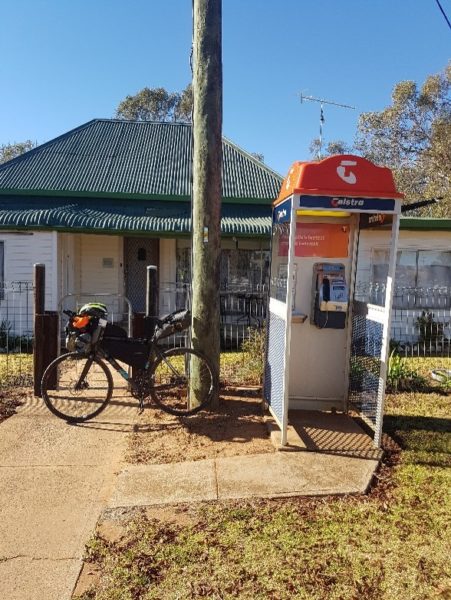 After kindly declining a “short trip” up to Cobar, I continued to Murrin Bridge. I called ahead in the days prior to make sure the community centre knew I was stopping by, but it was still a surprise to be ushered inside and served a hot lunch within seconds of arriving. I was then introduced to a resident who gave me brief history and tour of what it was like growing up in Murrin Bridge. 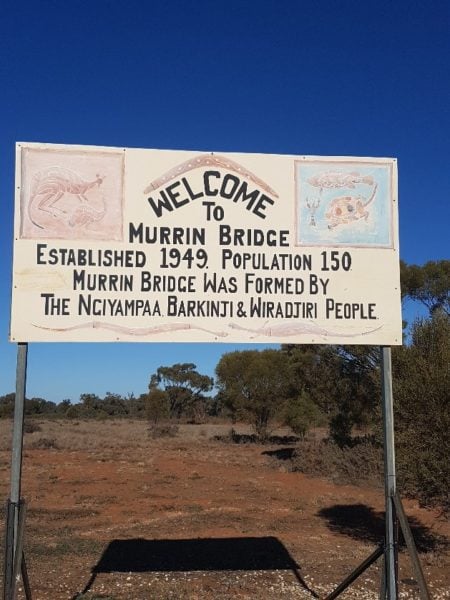 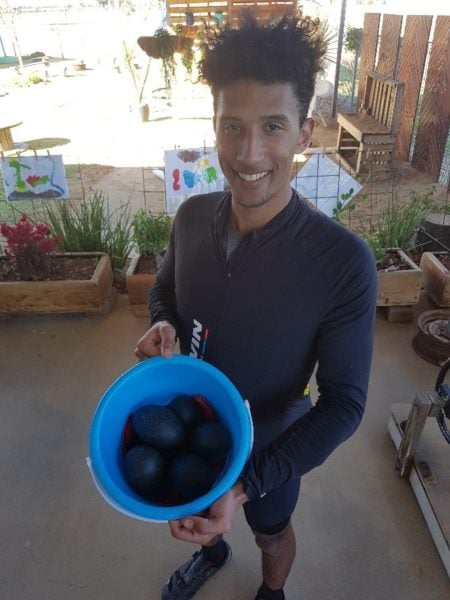 What’s more impressive? A bucket full of emu eggs or 4 days’ worth of helmet hair? Myself and a proud Murrin Bridge Resident, born and bred. 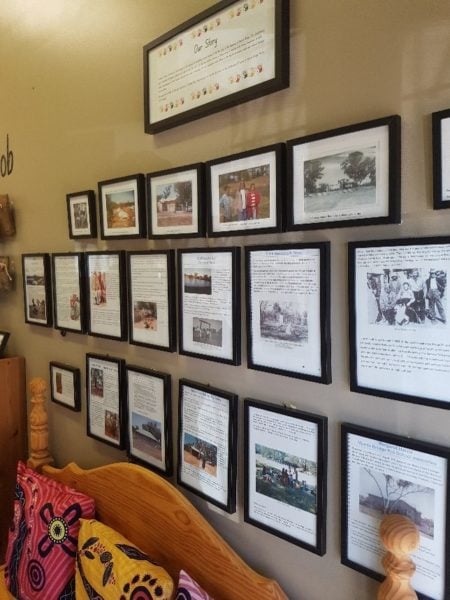 The brief mention of “dogs might chase you” after my walk around was enough to have me promptly on my way to Lake Cargelligo. After a brief stop at the scenic Lake Cargelligo, a glowing red sunset turned into night riding as I pulled into Hillston at about 8pm.

Hillston to Ivanhoe. Empty but difficult dirt roads. 360-degree horizon views. Turns out a name on a map isn’t always a town (looking at you, Mossgiel). If anyone finds a pair of black rain pants on this stretch of road, let me know.

Hillston to Ivanhoe. Can you spot the car? 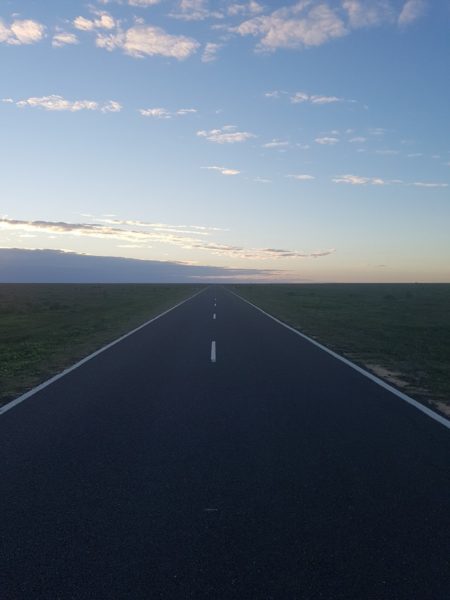 Nothingness. You can see a car approaching from about 5 mins away.

I had a planned a half- rest day at Ivanhoe due to bad weather, turns out; there was a rugby match on that had attracted about 1000 people that night. Safe to say, as a mixed-race city kid wearing Lycra on a bicycle, I stuck out like the sorest of sore thumbs. Minus the matching Hi-Vis. 1/2 of food options available in Ivanhoe. This place was crammed with patrons the previous night. Enough food and 3L of water to last 200km 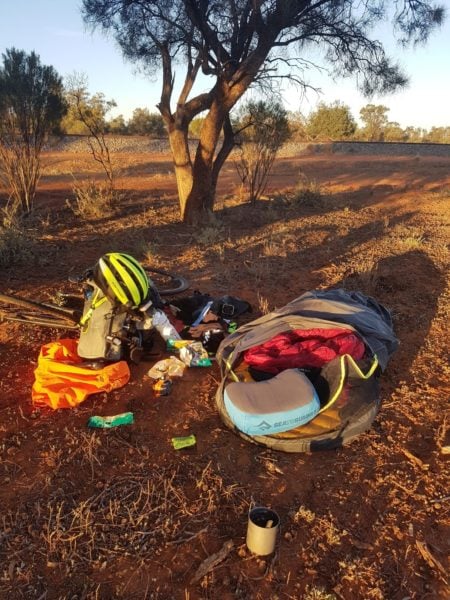 My sleeping setup. About 40kms out of Ivanhoe

Menindee to Broken Hill. Homestretch! Ran out of water with 40kms to go. Oops. Low tyre pressures from the day before + misplaced handpump = picking your bike up and walking it over cattle grids – how embarrassing. 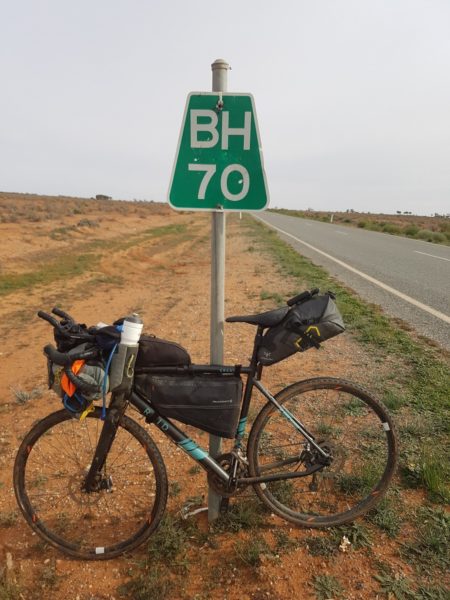 Broken Hill! I should have taken this somewhere more iconic, lucky the Harvey Norman Truck has Broken Hill written on it… 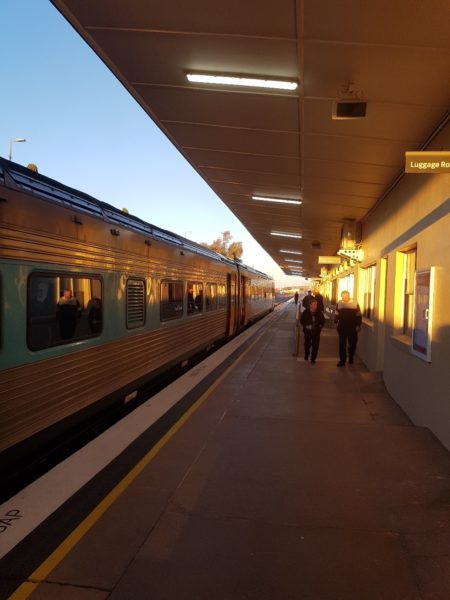 The early train back to Sydney. But first some deodorant…

Highlights from the Aboriginal Mental Health and Wellbeing Forum